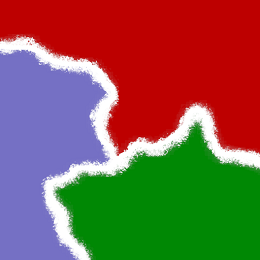 Territorial.io is an enjoyable online multiplayer strategy game. Players compete to establish their countries and attempt to control the world. As in real life, the online game's superpowers (or the best and brightest players) compete to become global masters.

You have the option to play either a collaborative game against the computer or a game against other human players online. You may select the location where you wish to start the game for a brief time before it starts. For expanding your territory or launching attacks against your opponent, it is important to increase your population before each game begins. Before you begin an offensive, be sure to know how many people are in your territory and how many are in your enemy's. Territorial.io, a web-based strategy game, is available on our website at no cost.

Territorial.io is one of the best .IO games you can play on Krunker.
This game works perfectly in modern browsers, no required installation and total free!
Territorial.io has been played by thousands of gamers who rated it 2.75 / 5 with 2 votes.

Did you enjoy this game? Then give other Defense, Html5, .IO, pixel, strategy, io games, io game, civilization a try.