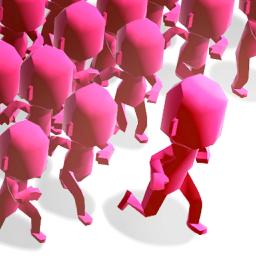 Crowd City .io is a unique io game that is dependent on how large of a crowd you can build! The city is teeming with criminals looking for fresh recruits. The city is congested, and you will be able to meet new members simply if you can go about with your character. When you touch the uncolored characters, their color will change to that of your team. If you come across other gangs or their members, there will be a battle between them and your team, and the one with the most members will win and have all the members of the other team. On the map, whoever has the most members wins. Prove that your audience is the most powerful in the city!

Crowd City .io is one of the best .IO games you can play on Krunker.
This game works perfectly in modern browsers, no required installation and total free!
Crowd City .io has been played by thousands of gamers who rated it 1 / 5 with 1 votes.

Did you enjoy this game? Then give other Color, WebGL, .IO, io games, io game, Mouse a try.