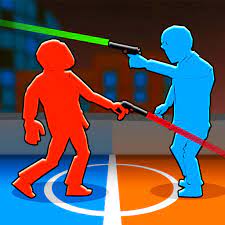 Ragdoll Duel 2P is an interesting two-player shooting video game. In the game, you will control one of two players, one red and one blue. They will move their hands up and down at random and fire when you push the buttons. Make an attempt to strike another player at the right moment. Of course, your goal is to shoot the other player as many times as you can until their health meter is completely depleted, at which point you will be proclaimed the victor. Defy the odds and win more rounds than your opponent! Start playing and discover incredible new levels!

Ragdoll Duel 2P is one of the best Shooting games you can play on Krunker.
This game works perfectly in modern browsers, no required installation and total free!
Ragdoll Duel 2P has been played by thousands of gamers who rated it 1 / 5 with 1 votes.

Did you enjoy this game? Then give other 2 Player, Shooting a try.